A downloadable CharaMEL for Windows

This is a program for creating character sprites that can be used in RPG Maker and other applications. You can create a character by combining part images. You can also adjust colors and apply effects. You can also incorporate your own set of parts images in addition to the included ones.

This is the first program I built using Godot Engine. I have tested it on Windows 7 and 10, and it will not start unless you are using 64-bit. Also, here are the requirements for the video card: OpenGL 2.1 / OpenGL ES 2.0 compatible hardware. Also, because it is a new program, security may block its launch. If it does not start, please check the security section.

This image shows a simple usage. Detailed instructions are available in online documentation, but only in Japanese. キャラメル -CharaMEL-
English documentation is still in preparation. 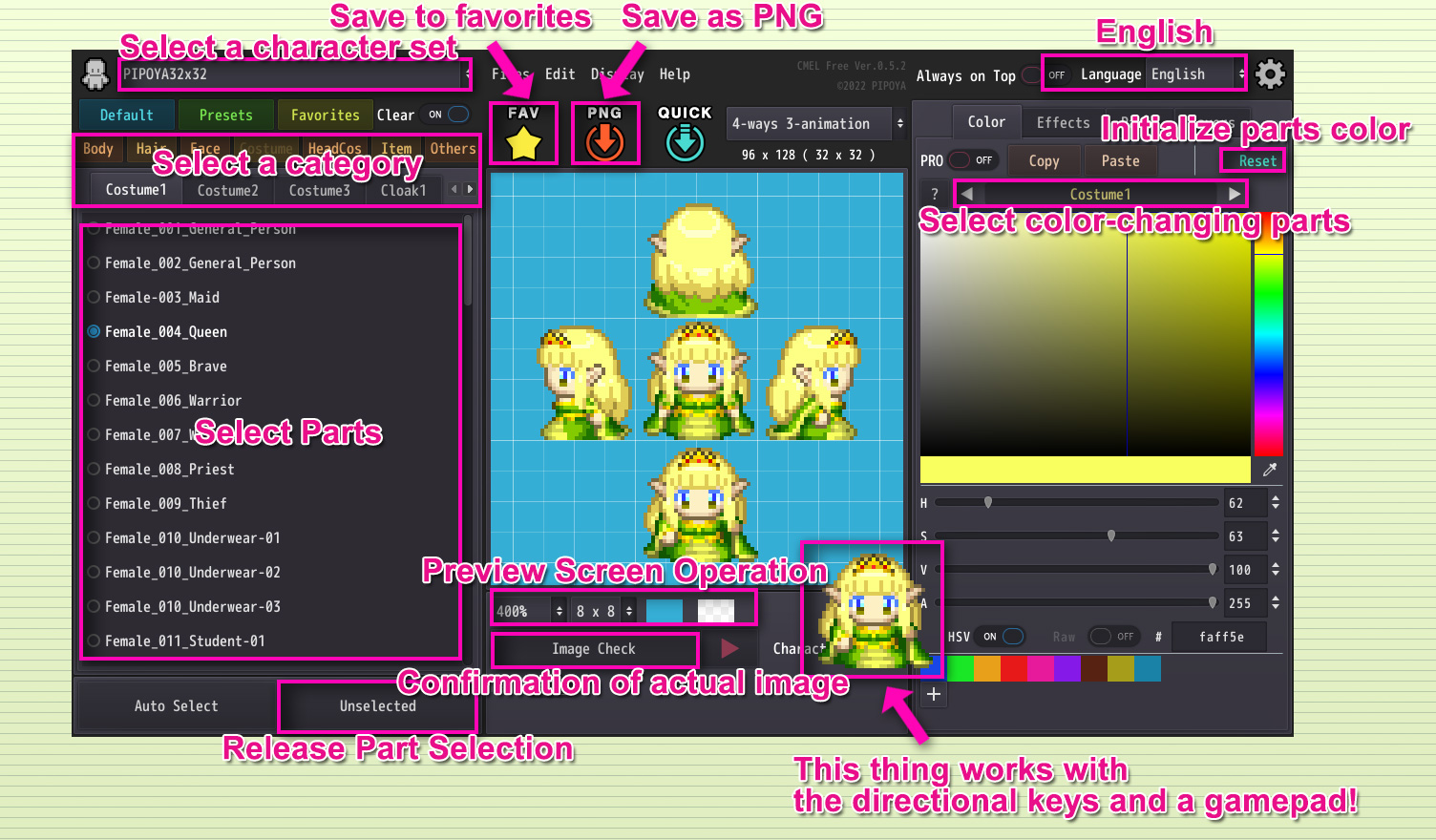 In the program, where possible, the Japanese has been translated into English, but there are a few places where the Japanese remains. The file names of the included parts sets also contain Japanese characters.

just a question - someone knows any CUSTOM , free character sets for it? i dont say default one is bad, i just want to test it a little ;p

yep i use free version (newest)

I stumbled on this by accident and gotta say it's awesome!!
Thank you so much!!

I cannot run CharaMEL because my graphics driver have been plugged out (?)...

Can I use the sprites in the directory and edit them in external art software (is that OK or NG), Pipoya?

Thank you for your comment.
Unfortunately, a certain level of graphics performance is required, as it depends on the operating environment of GodotEngine. You may freely edit the files for individual image parts. Please make use of them.

How do I buy the paid version?

Thank you for your question.
A similar question has been asked previously and a link is provided below. Please see here.

Finally got around to testing this, it works very well, thanks! Didn't have any problems.

hello, are there plans on adding more frame characters walking animation？Or provide Chinese version...(In fact, the Chinese version is more convenient for me to read. I can provide translated documents if possible.)Thank you so much!

I do plan to make it possible to change the number of frames of animation, but this will require a major reworking of the character's display since it will be linked to the character's display that was created in the early stages of development. I am a beginner when it comes to programming, so this is a bit of a difficult task for me, but I would like to proceed in between.

Chinese can be easily handled by using the functions of the "Godot Engine" used for production. However, there are several areas in the program that are processed differently depending on the language, and adding additional languages would be complicated, so we believe it is necessary to review the process. The language switching function is also a part of the experimental work we did in the early days, so we would like to consider efficient functions again. I would like to rework the system so that other languages can be easily added, not just Chinese, so I can't make it a high priority, but I would like to add it to the schedule. When you are ready to do so, we would appreciate your help in translating it into Chinese.

I apologize for the length of my reply. Thank you.

Thank  you so much! But I cant open  it on my laptop.  Do I need to install any other softwares to supprot it? My system environment :Windows 10 RTX3060.

I have solved the problem. Thanks a lot. 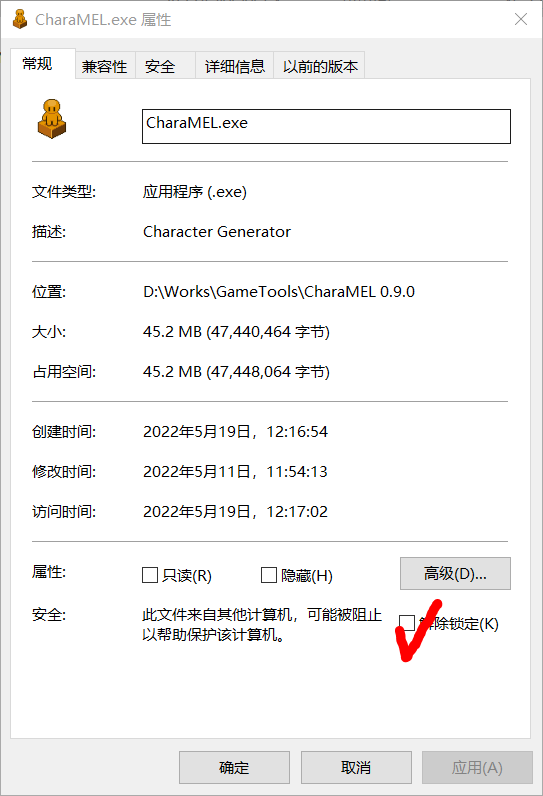 Thank you for your report. So it was a security issue. Since the software is still new, I was aware of this problem, but the warning was missing. I would like to add a note.

hello, are there plans on adding 8-ways characters like shown in the pictures linked on the japanese documentation?

Thank you for your comment. I will not be releasing them beyond that framework, as they are for my supporters. However, in the future, I may sell them as finished character sprites rather than part images for "CharaMEL".

This looks so awesome! Anyway, are the sprites created using this licensed under a Creative Commons license? If so, then what license (s) are applied to the spritesheets generated?

Thank you for your comment. The license is determined by the individual character part images. The licenses for the items I include in CharaMEL are as follows.

License
- For commercial or personal use.
- Use and edit freely.
- Not redistribute or resell this assets.
- It can be used for game development and other productions.

This looks great for customising my own sprites! I'm not sure if the 500 yen plan on cien is just picture clips, or pictures and software together? I'm wondering where I can buy the software separately since I want to create my own image material. I'm sorry if I'm disturbing you.

Thanks for your comment! Ci-en's 500 yen plans always have picture and software together. Since my motivation for developing this software is to make the assets I am creating more useful for my supporters, I do not plan to sell the software alone. Sorry.

This is so awesome! Thank you and God bless. I can definitely use this.

Thanks for your comment. I am glad you like it! I hope you will make use of it.

Thank you so much!

This looks great - is there a way to do 16x16 sprites and import specific palettes? (I'm using an 8 bit zx spectrum next system)

Thank you for your question. 16x16 sprites may be used. The smallest I have tested is an 8x8 sprite. There is no ability to change colors according to a specific palette file. I would love to have such a feature, but I don't know if I am capable of implementing it. I will keep it in mind to see if there is an easy way to implement it.

thats great!   Thanks for the reply

Is it possible to add additional animation frames?

Animation frames cannot be added. Only fixed ones.

Is it possible to add my own sprite bodies as well?

Thank you for your question. It is possible to add your own sprites.

Given you are working in Godot, is there any way to create a Linux port?  I understand if you don't want to support that platform.

hello, can you create a tool that can export/import 48x48 png files that works with MV/MZ?

Thank you for your question. Yes, it is possible by creating a set of corresponding sized part images. This image was loaded with a character image from RPG Maker MV as a test. 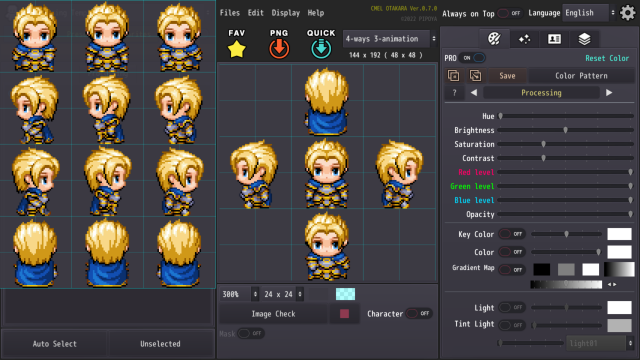 hiya I also love your tool and was wondering the same question but I dont understand the steps I need to take to do so_ could you please enhance your answer, I love your tool going to rate it 5 stars!

Thanks for your comment!
If you would like to create your own character set, details are listed below. However, I have only been able to create the document in Japanese yet, so I will make time to make it into English in the next month or so.

Was wondering if you could do the same thing for SRPG Studio, is there translated documentation for that? Love the software so far! 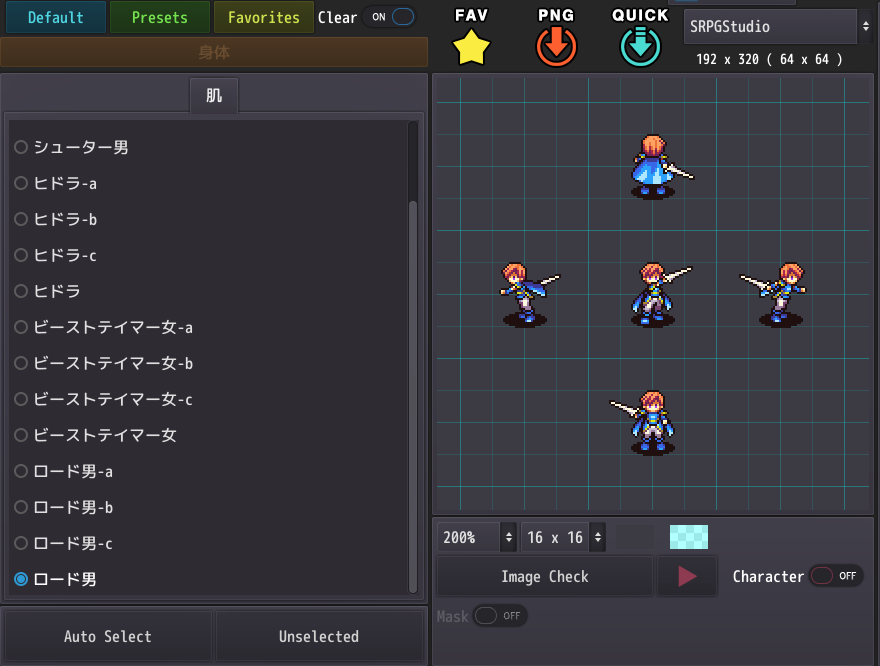 To support SRPGStudio, you need to use the character.json editing tool at the URL below or edit character.json directly. The program itself is available in English. I found a bug in the program the other day, when I reload a file saved for SRPGStudio, the SRPGStudio check is disabled. This will be fixed in the next version. Please be aware of this.

To edit character.json directly, change it as shown in the image below.

I am not yet in a position to fully support you, so I am sure I am not explaining myself well enough, but please try.

I just purchased this for $5, and it's working great!

What is minimum set? Thank-you.

Thank you for your purchase! The difference between them is whether they contain files with Japanese or not. this was an interim measure because there was a problem with the zip file, but now that the problem seems to be resolved, the minimun file will be removed.

Thanks for the info. I've followed you and look forward to your future tools. I'm just trying out CharaMEL and I really like it so far, will give a review about it later. Keep up with the great work!

And thanks for the follow up! Glad you like CharaMEL. I am a beginner in programming, so please let me know if there are any problems.

cool stuff, but can i request more men's hairstyles and a bow tie?

Thank you. Yes, now that I have made it public, I would like to create new parts. I don't have time this month, so maybe next month. The bow tie will be easy to make. Enjoy!

Glad you liked it! Enjoy.

However, I do have a question: how can I use this application to add and change parts from image files? Like png files

Thanks for the question.
If you want to add to the existing ones, there is a folder for parts images in the individual character set folders in the characters folder, so just put the image files in there. Then start CharaMEL. If you want to build your own character sets, the template32x32 folder is a good reference, but the English support is not perfect. This is something we intend to improve in the future.

Sorry. The existing character set data contains a lot of Japanese, so it may be a little difficult. Translation.csv" in the same hierarchy as the parts folder is a good reference, although it is different from the translation of folder names.

I downloaded this and cannot extract it. It keeps saying the file archive  is corrupt.

Thanks for reporting back! I have archived and uploaded the file again, please try again.

if the path includes any Japanese characters most extractors won't be able to extract it properly. I have used this app from your fanbox subscription and I had to open the zip in WinRAR, press Ctrl+E to set the extraction language to Japanese, then it will extract and the program will work properly

you won't notice this if you have Japanese locale set on your computer, but anyone with English will have this bug

the way you can fix this is to remove all Japanese characters from the file names, or include these instructions somewhere on the page

Thanks for the report, and thanks for the FANBOX subscription! I see, that's what you meant. It is difficult to delete Japanese, so I will quickly describe the procedure you wrote. Thank you!

Oh, and thanks for the screenshot!

and no problem! I love the 48x sprites! they are amazing! thank you!

Thank you! I'm glad to hear that, and please stay tuned as we continue to make 48x sprites even better. 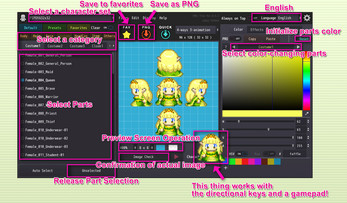 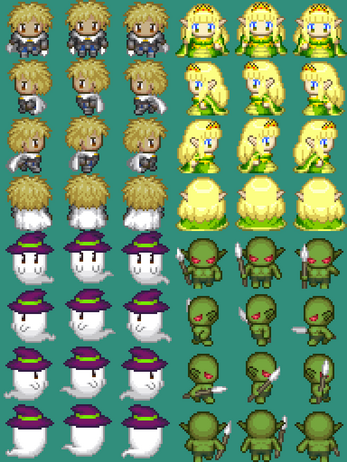 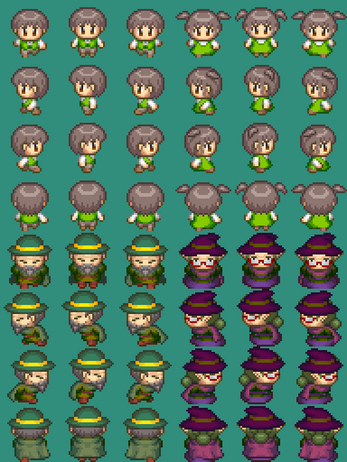 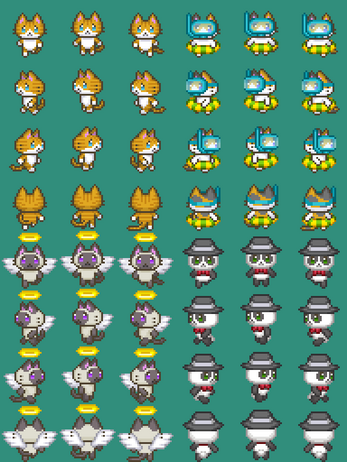 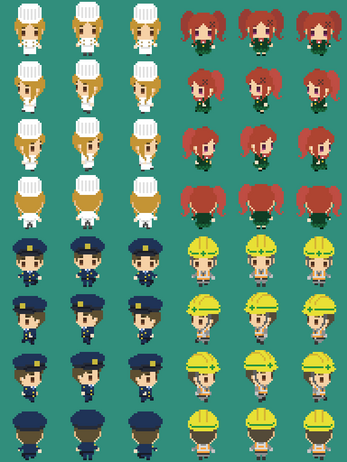